Quarto is a unified authoring framework for data science, combining your code, its results, and your prose commentary. Quarto allows for outputs that are fully reproducible and it supports dozens of output formats, like PDFs, Microsoft Word files, slideshows, and more.

Quarto markdown is designed to be used in three ways:

For example, a use case would be a technical report exploring recent trade statistics in which the code part pulls down the latest data and plots it. Or you could do the same analysis, but push it to a website. Best of all, you can decide whether to hide or show the code parts in the final outputs (or, with html outputs, allow users to choose whether to see the code or not). In more detail, use cases include:

Quarto is a really convenient wrapper for a bunch of other tools that makes it convenient to produce automated reports. You should check the latest documentation for an up to date guide on use——here, we’re going to see the basics and introduce a couple of templates that will serve you well.

You will need to go to the Quarto website and follow the install instructions first. You can check you’ve installed it properly using quarto check install on the command line.

You may also find the Visual Studio Code quarto extension useful and this book recommends it. This creates a special button within Visual Studio code labelled “render” that shows you how the output will look side-by-side with the input.

Quarto can be used to create output documents and slides in a wide variety of formats including HTML, PDF, Microsoft Office (docx and pptx), OpenOffice, and many more.

You can write the input documents (include code snippets) in two possible ways:

A minimal example of a report written with markdown content#

We’re now going to try the most minimal example of the first approach, a .qmd file, that also includes code and outputs.

There are advantages and disadvantages to writing your report in the .qmd format. The advantage is that it’s just a plain text file and therefore anyone can open it, look at it, and change it with a text editor (and it’s more convenient for version control in this way too). The big, big disadvantage is that you cannot see how the code is coming on as you write it (you have to render it to see the code outputs, as we’ll see in a moment). In the next sub-section, we’ll see a way of achieving a better workflow.

Let’s get our minimal example setup. The below code and markdown form the content of a file called report.qmd:

To turn the above report into an output PDF, save it as report.qmd and then, on the command line and in the same directory as the file, run

Remember that if you are using the Visual Studio Code quarto extension (recommended), you can hit the render button instead (but you’ll need to choose PDF as the output).

Successfuly create a PDF by saving the markdown above into a file called report.qmd.

Now, because we specified pdf in the ‘header’ of our file we automatically got a pdf. But a wide range of output formats are available. For example, HTML

One slight frustration with the conversion to Word Documents is that tables from code (dataframes) are not rendered as tables in the Word doc.

The basic syntax is to write --to outputformat at the end of the render command.

Successfuly create a HTML report by saving the markdown above into a file called report.qmd and then running the quarto render command with the to html option.

What happens to the menu on the right-hand side as you add extra headings using the ## markdown syntax?

There are different options for how the code block is executed. To include a code block that doesn’t get executed, just use regular markdown syntax (ie a block that begins ```python). Otherwise, you have rich options about whether to show the input code, just the results, both, or neither (while still executing the code).

For an example of a code output where the input is not shown, the code below will only show the output table by using the echo: false option.

The table below gives all of the options for code blocks.

Although it’s a bit clunky, it’s also possible to insert code results in-line with text. Here’s a minimal example of that.

Note that, in this example, the :2f part of {big_pen:.2f} is an instruction to report the given number to 2 decimal places.

Create a HTML report with an in-line number using the above example but change the formatting of the heaviest penguin to not show any decimal places.

There are, of course, lots of extra features that go beyond this example.

A minimal example of a report written with Jupyter Notebooks#

You can also write your reports with Jupyter Notebooks. As a reminder, these have cells that can be either text (in the form of markdown) or code (and they support a lot of languages), and have the file format .ipynb. This book recommends working with them in Visual Studio Code. Google Colab notebooks are a type of Jupyter notebook (and can be downloaded as .ipynb files).

Writing your automated reports in Jupyter Notebooks has one major advantage over using .qmd markdown files: you can run the code as you go, so you know what you’re getting and it’s easier to weed out bugs. This book recommends this approach to writing automated reports.

So what is the difference from what we’ve seen above? Very little, actually. Your content will still start with exactly the same header but this time it’s going to be in a markdown cell at the top of your notebook. To be explicit, the first cell in your notebook will have:

Subsequent cells will be code or markdown depending on whether you need rich outputs (figures and tables) or text. So, instead of a code chunk that begins with ```{python} like in the .qmd approach, you will just create a new code cell.

Remember that putting format: pdf into this header will mean that the render command automatically produces a pdf. You can change it to format: html to default to a html file instead—and both options can be over-written by passing --to format.

As before, you can create text that is dynamically updated with code outputs too; just choose a code cell rather than a markdown cell.

The main difference when it comes to Jupyter Notebooks is that you must decide whether you want to execute the notebook before you render it with Quarto. Executing a notebook just means run the code before exporting it to a new format. (As an aside, the best practice way to use Jupyter Notebooks is to save them without any code outputs, so execute and render would be the standard way of doing it.) The terminal command to run a notebook and render it is:

Create a new Jupyter Notebook called jupyter-report.ipynb with the header above. Re-use the blocks of code and text from the qmd example in the previous section. Render it with the command above.

To change the output type, add another instruction to the command using --to:

This is an alternative to using the Visual Studio Code Quarto extension.

We now turn to a big tip on the optimal workflow for making automated reports and slides. Often you are interested in seeing how the final report will look as you change the code in real time. This is possible with Jupyter Notebooks and Quarto. Run the following in the terminal

The image below shows an example of using preview side-by-side with a Jupyter Notebook in Visual Studio Code. 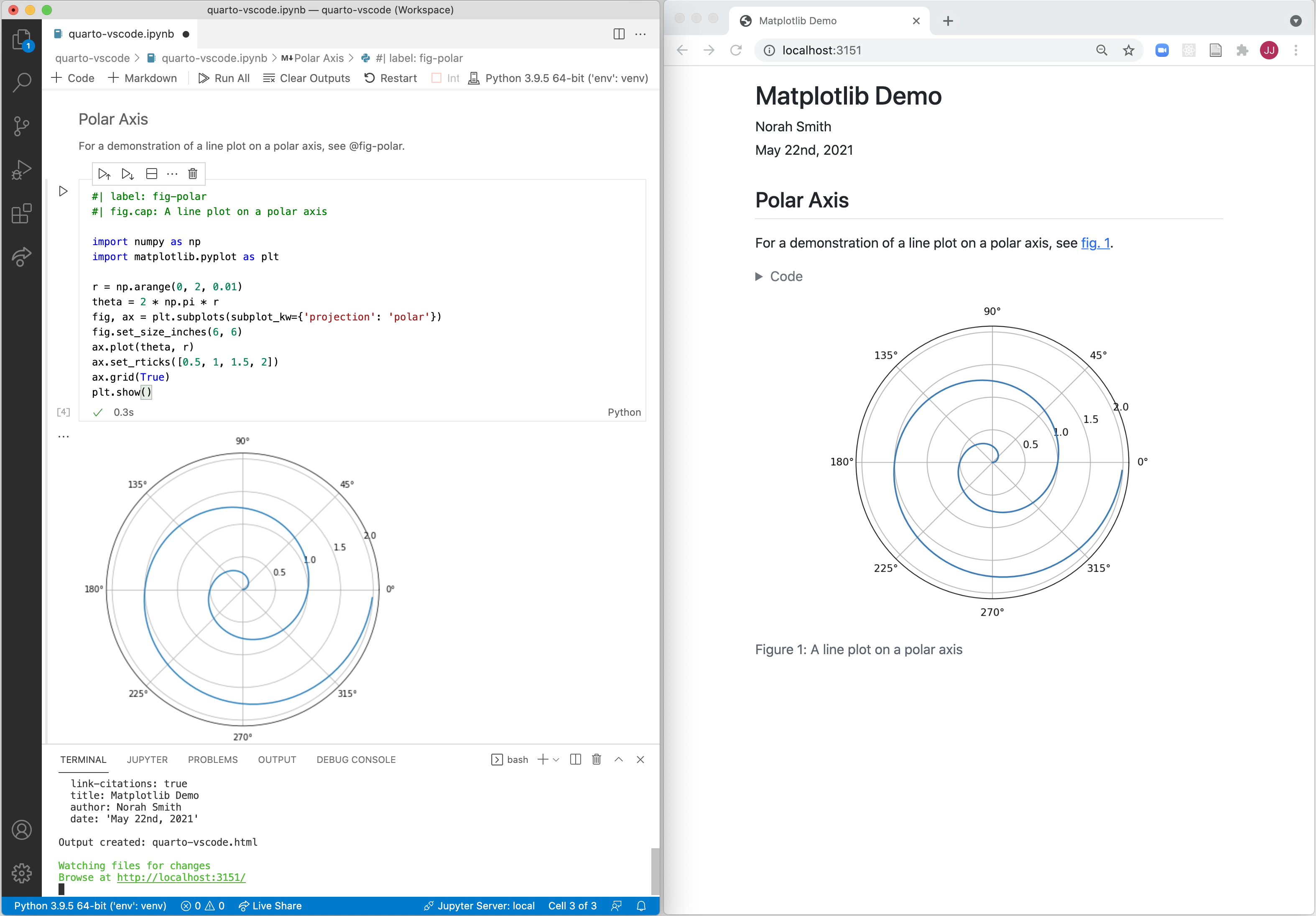 Take the Jupyter example from the previous exercise and change the format to HTML. Then add both a new text cell and a new figure (from a code cell) while in preview mode, making use of the quarto preview command above. If you need inspiration for the new figure, here’s a simple scatter plot:

It isn’t just reports that you can create; you can make slide decks too. You have three main output formats to choose from for slides:

Everything else is the same as we have seen before. Here’s a minimal example showing both code and text. It creates a HTML slide deck.

Render this slide example in all three of the main formats

Add outputs from in-line code into your rendered deck, adapting the heaviest penguin example from earlier.